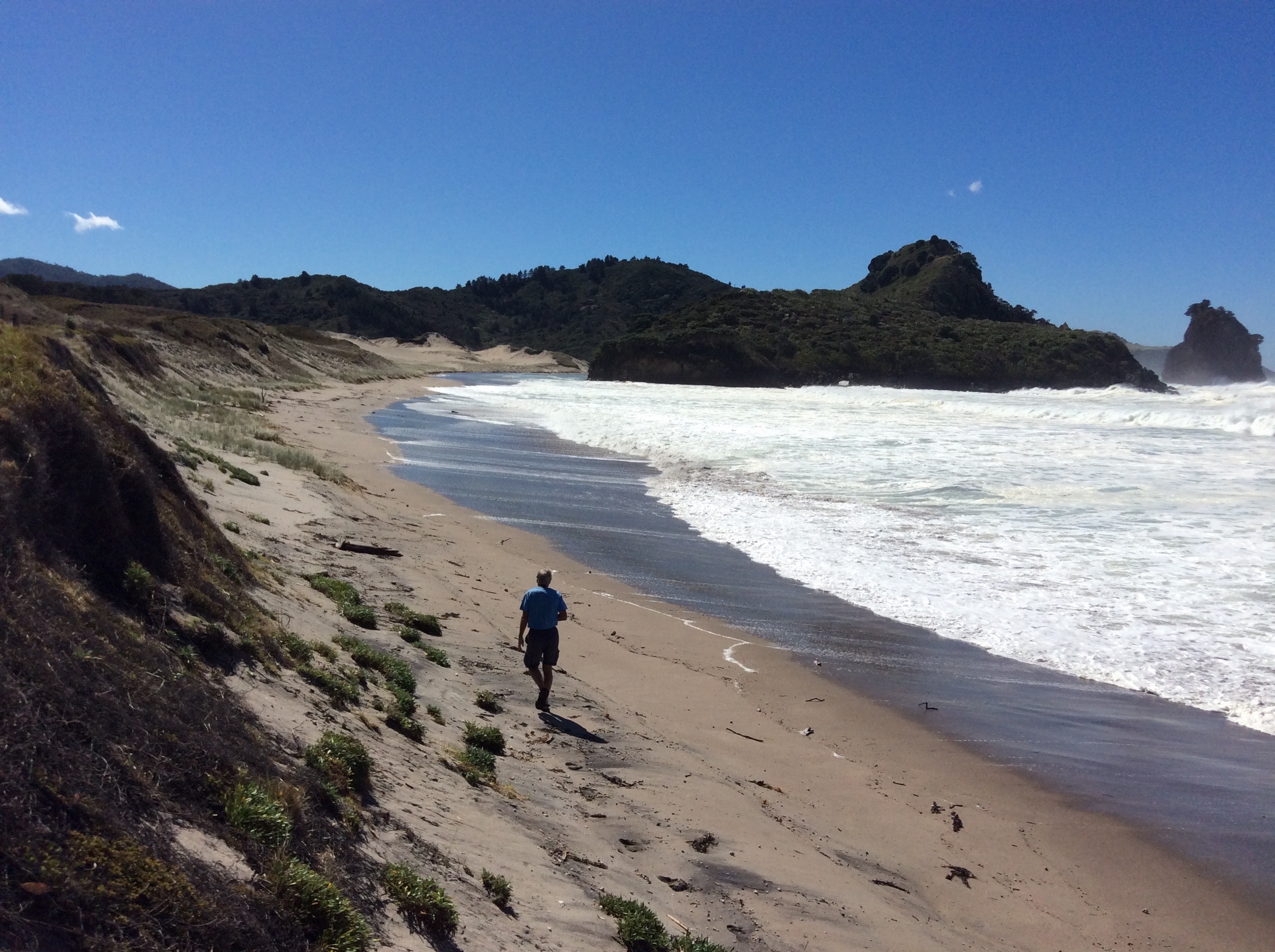 Awana, the day after the big storm

It is a belief on the island that all islanders rise at sparrow’s fart and go to bed, lights out, soon after dark. This is clearly the optimal off-grid strategy, saving our batteries for another day. John and I have tried to educate locals regarding the folly of early morning phone calls (ie: before 8.30am) to report their sighting of the lesser spotted dodo bird, and after 25 years or so it is gradually sinking in, although in truth I don’t think they can really fathom why anyone would lie in bed after 6am. We of course never phone them after 8pm, although we could, as we are usually still up, or at least awake, lights burning, screens sometimes on (even if a Kindle screen), close to midnight.

So last Sunday when I woke to the alarm at 8am, and instead of the sun pouring in the window onto the bed, the rain was pouring onto the tin roof with a distinctly stay-in-bed-you-dolt rhythm, we did. Just for another 15 minutes. Except when I opened my eyes again and checked the clock it said twenty to ten (AM, not PM!). I poked John and made the ‘T’ symbol with my fingers and then rapidly jammed my thumb on my forehead. This has long been a tradition in the Ogden family meaning ‘time for a cuppa tea and I’m not making it’. John leapt from the warm bed into the cold dank day and down the steep steps (“Are you aware” —says the daughter who at 21 was nearly trampled to death by an African elephant—“Are you aware that more deaths of the elderly are caused by stairs in the home than by any other means?”). I snuggled back under the duvet and listened to the sounds of the curtains being drawn, the kettle being boiled and the fire being laid and set. Then the evocative sizzle of bacon and back up the stairs he comes. I enjoyed my brekky and did another hour of work (reading is an essential task for fiction writers).

Dressed for the day I was downstairs by 11am, keen to do the breakfast dishes. But John had the bench covered with two large snapper he had caught the day before when he went out on his kayak— as it was cold and dark when he got back he’d lazily left them until this morning to fillet. The heads and tails were in the iron pot ready to boil up for stock, after which the flesh would be removed and chowder made. He was now sharpening knives (using the devilish contraption our chef son gave us in desperation, after another full day of his holiday was taken up by him having to restore all our knives from completely blunt to slice-paper sharp). John’s plan was then to fillet the fish body and who knows what else. He doesn’t like me mucking about getting in his way, so as the sun had now crept out I escaped to the beach to do another couple of hours of work, telling him that I would clean up when I got back.

It was warm and peaceful on the beach so when I got back at 4pm, I discovered that the bench, table and every other surface was covered with dirty pots, pans and utensils; also completed chowder, beautifully filleted fillets, and fish cakes with bits of green from our (John’s) garden protruding from them. “Wow”, I said. “I’ll clean up.”

John looked at me. “You’ll be in the way. I have to clear the beetles out of the hot water tap.” This is a regular task involving lots of mess and water and designed to blast out the petrified beetles—they are rumoured to get into the solar water cylinder from the outlet spout on the roof—so our hot water comes out faster than a dribble. At last John finished with the kitchen bench and sink and disappeared outside to chainsaw down some more dead trees and cut them up to replenish our rapidly disappearing wood supply—and winter has just begun—so I can have a nice deep very hot bath later.

I washed the dishes, the pots, the pans, the table, the bench. An hour later, dark having arrived, I was sitting exhausted by the fire reading a new book and enjoying a well-deserved glass of Merlot when John appeared, covered in sawdust. “I’m off for a bath,” he says. “What’s for dinner?”

I glanced up from my book. “Chowder? Fish fillets, Fish cakes? Perhaps all three?”

John looked at me.

As this is the first book review of my new newsletter venture, I decided it had to be of my most favourite novel of all. I have read probably hundreds of novels I love, and am reading more every month, and a few come close to perfect, but not this close.

Crossing to Safety by Wallace Stegner.

Thanks to this book being rated as the best novel they had ever read by a group of well-known novelists on an Australian TV book club programme, I bought it and read it. I had never heard of Wallace Stegner before that, probably because I am a New Zealander and as an American author he was not on our school "to read" list. Stegner (1909 -1993) was a novelist and short-story writer whose work often celebrated the American West. He won many awards including the Pulitzer Prize in 1972 and the U.S. National Book Award in 1977. Crossing to Safety was his last novel, published in 1987 when he was seventy-eight (how good is that!).

Crossing to Safety is the story of a life-time friendship between two disparate couples. It begins near the end, in 1971, as Larry Morgan—the narrator of the story— and his wife Sally arrive at the Vermont summer home of their old friends, Sid and Charity Lang. They have been summoned there by Charity, who is dying of cancer. The happenings during that day remind Larry of things past, and we follow him back to Madison, Wisconsin, in the Depression years. He and Sid first meet as junior teachers in a university English department. Larry and Sally are financially struggling, and Larry is focused on his dream to be a novelist. Sid and Charity have everything—breeding, money and intelligence—but are just as excited by the possibilities that stretch before them. They embrace the Morgans, supporting them financially as well as emotionally, especially when Sally contracts polio. As the years go by, visits to the Langs’ summer home in Vermont and a trip to Florence highlights Charity’s vivid dominance over the quiet, passive Sid (earning the disapproval of Larry) and heightens the contrast between their marriage and that of the Morgans. The weave of the friendships between these four people—what they were and what they became—and seen through the lens of old age, forms a tale that is totally involving.

How refreshing to read a story about two couples who remain friends all their lives without needing to have affairs, kids who go off the rails, suicide attempts, and so on, and where each couple continues to love their partner unconditionally throughout. The four main characters in this book are deeply and empathetically drawn. How easy it is to see aspects of ourselves reflected in one or other of them; to see our own relationships mirrored in theirs; to find ourselves wanting to shake Charity, even while knowing that for Sid she is his other half. In some respects Stegner's writing reminds me of Rumer Godden, the English author of China Court and In This House of Brede, both favourites of mine. Are there writers still living that can write like these wonderful writers, now gone? I haven't found them. Put this on your bucket list to read soon, if you haven't already, or perhaps read it again to remind you what perfect writing is all about.

2. If you are a writer or get tired of having to hide the cover of the book you are reading in certain company, this long conversation extracted from The New Statesman website between Neil Gaiman and Kazuo Ishiguro (http://www.newstatesman.com/2015/05/neil-gaiman-kazuo-ishiguro-interview-literature-genre-machines-can-toil-they-can-t-imagine) about the pomposity and stupidity of dividing books into genres is worth a read. A particularly great line Neil Gaimon recalls coming from Terry Pratchett is “You know, you can do all you want, but you put in one fucking dragon and they call you a fantasy writer.”