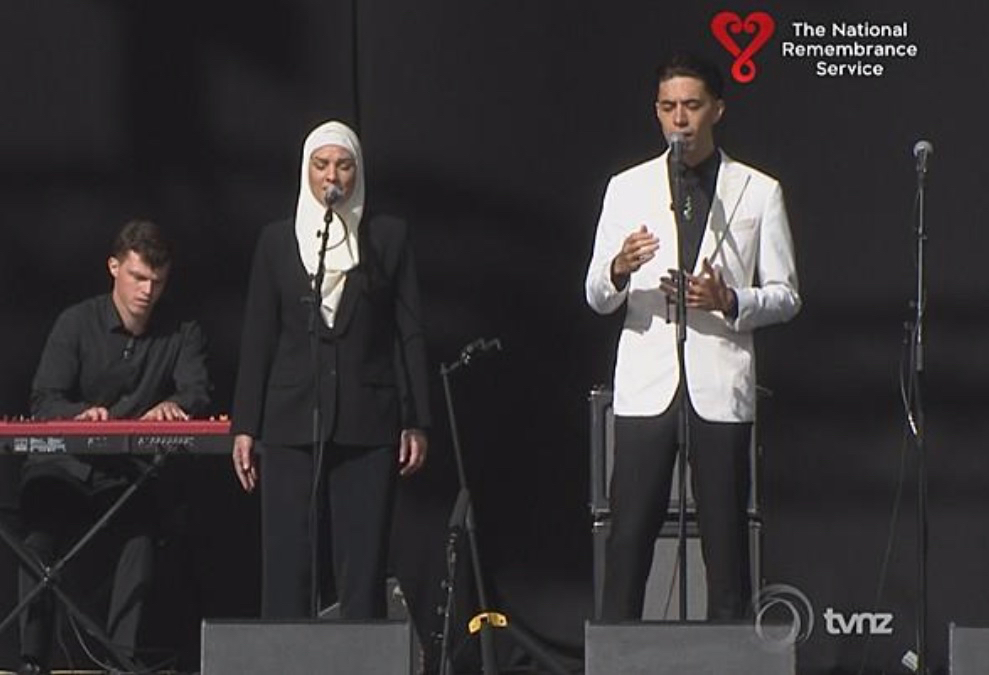 Hollie Smith and TEEKS singing a powerful and beautiful rendition of Whakaaria Mai (How Great Thou Art) at Friday morning's National Remembrance Service for the victims of the March 15 Christchurch mosque attacks.

Two weeks after the terrorist attacks in Christchurch, along with almost every New Zealander, I have only sadness and hope to share. Here is the link to Yusuf Islam Cat Steven's Peace Train for those of you who haven't yet seen and heard it, from the National Remembrance Service to honour the victims of the Christchurch Terrorist Massacre held on Friday at Hagley Park in Christchurch. Every second of the words and songs of that service, shared by the thousands who were at the service, and the hundreds of thousands who watched it, often in tears, were about peace and hope and fighting racism, violence and hate with love and forgiveness, expressed from the heart by Muslim leaders, Muslim victims, Maori and other leaders of Aotearoa New Zealand, and from our compassionate Prime Minister, Jacinda Adern. Her words are wise and worth listening to.

I have been respectfully reprimanded on Facebook for finding the singing of 'How Great Thou Art' in Maori and English at the Remembrance service moving, given the atrocities religions have been responsible for.

Obviously where there is a hymn God will be mentioned, and indeed praised. NZ is one of the most secular countries in the world. At the last census , 42% of us declared we had no religion, 48% are Christian, 6% follow a non-Christian religion and 4% made no declaration. About 15% regularly attend a church. Yet in services like this 'God' is often mentioned, and referred to in these beautiful and much loved hymns and in our national athems that are so central, historically, to a country. 'God' and 'Allah' and any other deity named in a National Remembrance Service like this resonates for those who are religious. For those who choose not to be—often because of the destruction some members and power structures at the centre of those religions have been responsible for—the umbrella words of God, Allah, Buddha, and others, are understood as the embodiment of love, kindness, non-violence and forgiveness, available to all humanity. As Jacinda Adern has so powerfully said, we in Aotearoa New Zealand believe that these values are who we are, and who we are going to strive to be with much greater awareness and, we hope, insight into ourselves, from now on.  Religion or no religion, songs that refer to God or the Peace Train— these are not the issues here, but respect and caring for others who believe in non-violence, and care for their fellow humans, are.

And for me, beautiful music played and sung with love will always remain precious, and I will always want to listen to it, even if it praises a god I do not follow or believe in. Choosing not to follow a particular, or any, religion, and rejecting the dogma and atrocities carried out by some of their number and their power structures throughout history and into our modern times, does not mean throwing away the art and music and shared humanitarian values that so many of the non-violent followers of these religions (and inspired by their beliefs)  have also given us. Anyone who listened to Farid Ahmed, whose wife Husna Ahmed was killed in front of him at Al Noor Mosque, for them a place of love and safety and community, could not fail to understand that it is the human, not the 'religion' who matters here. And like the Maori word Aroha, so much a part of our everyday language in Aotearoa New Zealand, Farid Ahmed's words and the blessing the Muslim people offer to all others they meet, is welcomed by me.