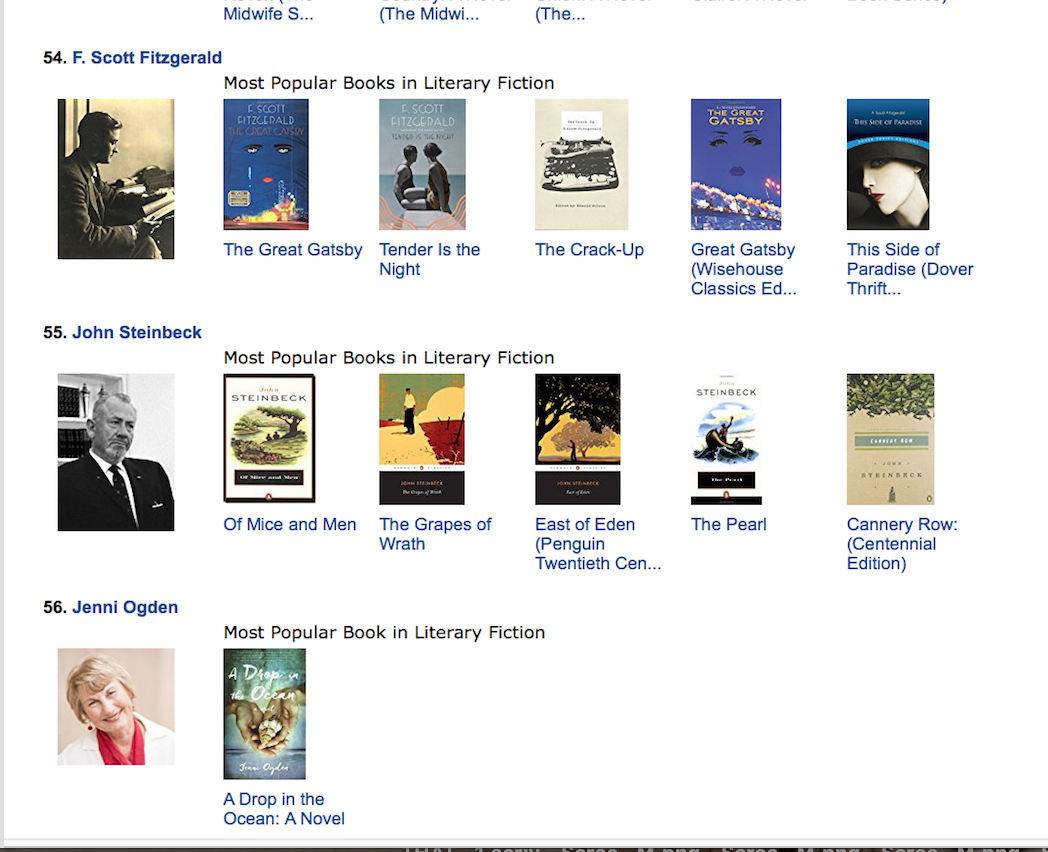 F. Scott Fitzgerald, Steinbeck, and me.

The End of Summer, apparently

Writing
Two of my three manuscripts sent to editors in the UK have come back, and both recommend not to throw them in the fire. The editiorial assessment of the very first novel I wrote which has been revised so many times it is almost unrecognisable was masterful (the editorial critique, not the novel!) and proved yet again what indispensible people great editors are for novelists. I am newly fired up to change this yet again, which is exciting. The psychological suspense also could work with revision but in truth my heart is not into that. I wrote it originally to see if I could, not because I really wanted to. It will come last I suspect in the queue for revision but at least I won’t burn it just yet. I await the assessment of my most recently completed novel which I still love. Scary. What if the editor says “Use it as a learning experience and move on…”

But a strange thing has happened. Funny really. Funny and cheering. As British Prime Minister Benjamin Disraeli was rumoured to have said: "There are three kinds of lies: lies, damned lies, and statistics."
‘A Drop in the Ocean’ has, without any marketing whatsoever, begun to climb the US Kindle charts and stay up there. Today it is ranked #255 of all Amazon US Kindle books (millions), #13 in Women’s Lit Fiction, and in the top 20 in its other categories. Amazon also ranks authors (rather than their books) on their popularity by the sales of all their books in particular categories, and I have got to #50 in Kindle Literary Fiction, and to #56 in Literary Fiction in the category that includes all books—print as well as e-books—just behind…dah dah! F Scott Fitzgerald and John Steinbeck with their long lineups of classics! Is this crazy or what! Of course the authors of ‘The Great Gatsby’ and ‘The Grapes of Wrath’ may have been up there for a while… all those students buying them for their English Lit classes.
Amazon clearly exists to give us pleasure (and make them lots of money in spite of their massive discounting of books, including mine, at their expense), so may as well enjoy a brief spot in the sun.

In some ways this is Lisa Genova’s most powerful book since “Still Alice.” Its power is in her ability to say it like it is, and when the topic is ALS (Amyotrophic Lateral Sclerosis,
a form of Locked-in Syndrome or Motor Neuron Disease) this makes for grim reading. ALS is known mainly by the general public because it is the disorder suffered by Stephen Hawking. However, Hawking, who died last week, had a very rare form of the disease that allowed him to live a long and productive life. Lisa’s central protagonist, Richard, had a rapidly progressive form.

At one level, this could be (and should be) a handbook for health professionals who are involved with Motor Neuron Disease patients. Whether family carers in the early stages of caring should read it is not so clear. I’m not sure if this might not be too much information too early in the process. In the early stages of finding themselves in this situation family members and the sufferers themselves need some hope in order to keep going, and in Richard’s story there is almost none. However, it definitely points to the need for family and carers of ALS sufferers to have extensive help and relief from the outset.

However, this is a novel, not a clinical handbook, and in that it did not come close to “Still Alice”. The central character is Richard, a celebrated pianist, an inspired choice of career to allow the horrors of this creeping paralysis to destroy first the musical genius and then the man. The early chapters of the book when he begins to face the reality of losing his ability to play, finger by finger, showcase Lisa Genova at her best, giving us insights from the point of view of the sufferer himself. Unfortunately Richard is not a thing of beauty like the music he once made, but one of the most unlikeable characters imaginable: arrogant, self-centred, a womanizer, and previously a cheating husband of Karina, the other central character, and an uninvolved father of their only child Grace, now a young woman. There was an attempt to make Richard feel sorry about the way he had treated his wife and daughter by the end of the book and his life, but it didn’t ring true.

His ex-wife, Karina, had also been a fine pianist and believed her career had been curtailed by Richard’s ambition. She cannot stand him yet finds herself offering to take him back into the house they used to live in so she can help care for him. This was a stretch for me to believe. She is a rather weak and not a particularly likeable character herself, and we discover she was not blameless in the breakup of their marriage. She at least continued to find the ‘nursing’ situation repulsive (as most of us would) and Richard basically a creep, which was consistent if uninspiring, although on a couple of occasions we see her sympathy breaking through. Their daughter is almost a non-character, and not convincing. The family dynamics were minimally portrayed and seemed almost a sort of afterthought to the main story, the horrors of the disease itself.

Not everyone in real life is loving and kind and forgiving of course, but a story as grim as this could have benefited from considerably more of these characteristics! The only main character who was indeed all of these things was the professional home carer, Bill. As Karina often thought, “God bless Bill”. For the reader as well!

Genova does intensive and hands-on research for all of her books, and this was definitely the case for this book. Her notes and acknowledgements at the back are very worth reading. The ALS victims and their families she spent so much time with (many of whom died before the book was published) were the extreme opposite of Richard, Karina and Grace. Courageous, giving people facing this terrible situation seem more the ‘norm’ than the unpleasant Richard and Karina. If the story had reflected these real peoples’ experiences more, then I think it would have been more powerful, more emotionally moving (as it is, it comes across as very clinical), and would have had a more positive influence on bringing public attention to this devastating disease. The graphic clinical details could all have remained intact, as it is these that show us just how terrible this disease is, but a story of people going through this that doesn’t bring readers to tears (not me, anyway) has lost something precious. I was also rather surprised that there was almost nothing about eunthanasia woven into the subtext. The life/death decisions that had to made seemed more about whether the nursing care and equipment required to keep people like Richard alive could be afforded when the point was reached where only artificial breathing would do the trick (this being the US where private health care goes to ridiculous extremes to keep peopple alive, but public health care is minimal.)

The book’s reviews demonstrate that lots of readers found it a page turner (and it was in a strange sort of way) and many even found it emotionally moving. But there you are, reading is a subjective ole thing, so give it a go. You will definitely learn something and at the end of it likely feel grateful for the blessings you have.

My latest Psychology Today blog post
Zilch and I have had an e-mail from Psychology Today to warn me that I have not blogged for 90 days and my name will not shine on their current experts list again until I blog once more! April, I promise.