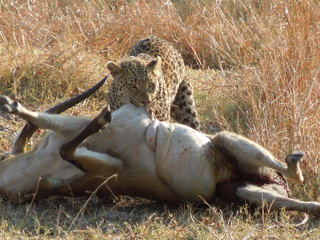 Relaxed Leopard, Moremi Game Park, Botswana
When I first set up this website, I mentioned African safaris as one of the things to do after "retirement" from one's long-time career. I had been to South Africa and to two amazing private game parks before, but had a long-time desire to go on a camping safari. Last month John and I camped in Kenya, and Botswana and also spent a week at Kruger, and a couple of days at Victoria Falls. Phenomenal! Especially the camping safaris, first 6 nights in Kenya at two camps with a Masai camping safari group called Gamewatchers, and then with a mobile camping safari company called Letaka, in Botswana. The camps were perfect for us; called adventure camps, they are the "Livingstone I presume" type; not the luxury ones that look more like lodges. In Botswana where we were with the same guide and his team of three, for 10 days, the team went ahead when we changed camp (three times) to set up the tents, each of which had its own bush toilet and a bucket shower. All the food was cooked over open fires and was amazingly good; even included delicious cakes for afternoon tea (after the siesta in the heat of the day between the morning and late afternoon safaris). Our tents were in the bush, open to animals, and we had lions, elephants, hyaenas, wild dogs, and even the elusive leopard actually roaming around our camp at night. It is quite safe if you stay zipped in your tent! The key to a lifetime experience is to go with the right safari company, stay in private conservancies at least part of the time, or in remote areas of Game Parks, and have a guide who is incredibly knowledgeable. The photos I took with my very ordinary little camera give a hint of the wildlife, from beautiful birds, to dramatic kills by cheetahs and leopards, all in stunning environments.
Be the first to comment