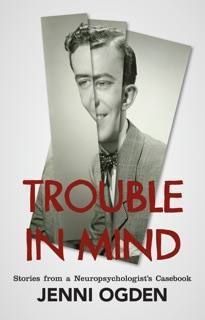 Australian Cover
With the Australian edition of my book out, it is exciting to read nice reviews in the major newspapers, and to have the opportunity to talk with Australian radio hosts. Here's the Sydney Sunday Herald review.
Trouble in Mind
Jenni Ogden
(Scribe, $29.95)
If you loved reading
the case histories
of Oliver Sacks, you’ll be similarly
engrossed by the tales told by
neuropsychologist Jenni Ogden. Read More
Be the first to comment 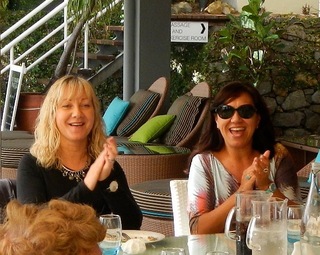 Fabulous writers and great dinner companions, L.A.Larkin and Anita Heiss
In July, from bush camping on a remote island to a luxury hotel: we went to the Whitsunday Writers’ Festival at the Coral Sea Resort, where our beautiful room hung over the mangroves bordering the bay. It was a tiny, exclusive festival where the guest speakers almost outnumbered the guests. As a consequence we got to know everyone and had a fantastic time. All the speakers were outstanding, and also a lot of fun. Anita Heiss, one of Australia’s best-known aboriginal writers was a delight to listen to. Her latest book ‘Am I Black Enough for You’, was a finalist in the 2012 Human Rights Awards, and she and her book have been the centre of considerable controversy because of a recent landmark court case Anita and her peers won against racist journalism in Australia. Other speakers included Tony Ayling, an expert on coral reefs, who had us riveted with his story of how he escaped from the jaws of a saltwater crocodile off Lizard Island, where we camped for 10 nights last year; Joyce Morgan and Conrad Walters, both journalists and authors of the fascinating ‘The Jewel of the Silk Road’; and Louisa (L.A.) Larkin, who writes environmental thrillers, and, like Anita, is seriously good fun at dinner parties. The other participants (like John and I, not speakers) were all equally good value, and hopefully we will keep in touch with many of them and with the speakers.  Read More
2 Comments

Tags: travel, writing, festivals
May, 2013, and the beginning of almost 3 months of R & R. First visiting kids and grandkids in Christchurch and Whangaparaoa, then the wonderful Auckland Writers’ and Readers’ Festival where I went to 17 sessions. Great sessions included Jackie Kay (what a personality she has, and I'd already read her biography and a poetry book); Ramona Koval (another delightful personality in her own session, and having her interview Kate Atkinson made that session extra special I think); Tragic Brilliance (both biographers fascinating); Mr. Cohen revealed (again the personality of Sylvie Simmons shining through, especially when she sang at the end); and Edward Rutherfurd. I think the magic lies more with the personalities of the authors rather than the interviewer, mainly because good interviewers ask the great questions and have the flexibility to follow leads, but then fade into the background. The authors who added that special touch, such as Jackie Kay with her wonderful readings (the Scots accent helped!), Sylvie Simmons with her song, and William Dalrymple with his scruffy clothes and irrepressible enthusiasm, held the audience from start to finish.  Read More
Be the first to comment

Holidays 2013! Camping on the Whitsundays 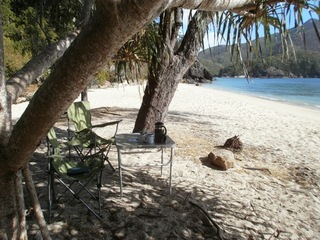 Coffee time at Crayfish Beach
After the Auckland Writers' and Readers' Festival off we flew to our winter bolt-hole; 6 weeks at Marlin Cove Resort, Trinity Beach, north of Cairns, where amongst other things (mainly bird watching) our friends who manage the resort, Derek and Kerry, treated us to not one, but two bottles of Grange. Then a drive south to the Whitsundays, camping at National Park campsites on the way. At Airlie Beach, we discovered that the lovely young woman who booked us into Magnum’s Backpackers for a night knew our son Joachim; her husband had worked with him in the UK 15 years ago and they had all shared adventures in Morocco. The next day we put our camping gear and 40 litres of water onto a boat which dropped us off on Crayfish Beach, a boat-access-only idyllic bay on Hook Island in the Whitsundays. There we camped in splendid isolation for 4 nights, totally alone and with no way of communicating with the outside world. Not another boat or person did we see, except on the far horizon. We did share the outer part of our tent with a very friendly and cute brown rat, whom we fed with chocolate. The good snorkelling didn’t last as the gale-force winds out to sea (which did not reach our sheltered bay) made visibility poor, but never mind. We were picked up by the same boat which sped back in 40 km/ph winds and hugh seas to Shute Harbour. It was a special experience (the isolated beach camping, not the boat trip back), and one that must surely be almost extinct anywhere else on the globe. (Aside: I have never been to the Whitsundays before and they are forever linked in my mind with the consummation scene between the priest, Father Ralph, and Meggie in Colleen McCullough’s ‘The Thorn Birds’. 1977 that book was written; imagine the furore it would cause if it were published now, given the horrors of the catholic church’s paedophile priests. Perhaps it would pass muster because Father Ralph waited until Meggie was all growed up.) Read More
Be the first to comment