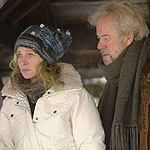 Julie Christie and Gordon Pinsent in "Away From Her".
Have you seen the movie, “Away From Her”? The film is based on Alice Munro’s short story “The Bear Came Over the Mountain,” later re-released in novella form as “Away From Her.” It is the story of one couple’s experience with Alzheimer’s disease (AD). Julie Christie plays the role of Fiona, as she loses her memory and her independence, but not her warmth and gentleness, and Gordon Pinsent plays the role of Fiona’s husband, a retired academic whose love for Fiona and his dependence on her for his happiness is tarnished by the guilt of his own past affairs. When Fiona starts to wander, she makes the decision to live in a nursing home where she can be cared for safely. As her dementia progresses, she forgets her who her husband is and transfers her affections to another man; a patient in the nursing home. As Gordon watches, often from the sidelines, she drifts away, leaving him alone with his long goodbye.

Keeping AD patients at home in a familiar environment for as long as possible is generally considered to be the best thing to do—for the AD sufferer at least—as this provides cues for their memory and thus decreases their confusion. In the film, Fiona went into a home rather early. That this was largely at her own insistence, makes this an unusual scenario. Most elderly patients understandably fight against being taken from their home for as long as they are able. For them, this must be the proof that their end—and a frightening and drawn-out one at that—is unavoidable. For families, moving their parent or grandparent into a nursing home is painful and guilt-ridden, yet there is an underlying sigh of relief. The responsibility and stress caused by caring day in and day out for someone with advancing AD is enormous. Often the burden of nursing falls on the woman, and children in the family can be disturbed by their AD family member’s behaviors—often including paranoia, inappropriate behavior such as walking naked outside, and temper tantrums. Many research studies have shown that the family carers—usually women—of AD patients have a much higher rate of clinical depression than other adults of a similar age and socio-economic group.

The decision of whether and when to place an AD relative in a nursing home is one of the most difficult decisions the family and the AD sufferer will have to make. It will be “informed” by financial considerations, how good the nursing home is, and how difficult it is for the family to care for their AD relative so that they will be safe, and the family will not be fractured. Family counselling from the time the AD person is diagnosed can make this later transition less stressful for everyone, and give the AD sufferer control over their lives for as long as possible. Even control over small parts of their lives can make an enormous difference to their dignity, and give the family ways they can show their love and respect. Sadly, as the dementia worsens, it is the family who needs counselling: the long goodbye that is a hallmark of AD is synonymous with the grieving process.

AD constitutes approximately 70% of all dementia cases, and affects more than 25 million people worldwide. In the USA alone it has been estimated that there will be about 13 million people with AD by the year 2050. In spite of massive research efforts, the causes of AD are not known. In some cases there is a genetic component, but environmental and other non-genetic factors such as levels of physical and mental activity may contribute to the development of AD. This gives some reason for hope, and as the baby boomer generation ages, more and more articles are written on how we can protect ourselves from developing dementia.

Various lines of research suggest that people who are highly educated or physically and mentally active into old age are less likely to develop AD. In a fascinating long-term study carried out in 1996 by David Snowden and his colleagues, the density of ideas expressed in brief handwritten autobiographies written by 93 white American nuns from the School Sisters of Notre Dame religious congregation when they were in their early twenties. predicted whether or not they would develop the cognitive impairments typical of AD in old age. Those with the lowest density of ideas were much more likely to demonstrate severe cognitive impairment 58 years (on average) later. As the findings were the same for a subset of 85 college-educated nuns whose occupation was teaching, it seemed unlikely that either adult education or occupation were relevant factors. In a subset of 25 nuns who died, a ‘low ideas density’ in their autobiographies at age 22 (on average) predicted the neuropathological signs of AD in their brains at autopsy. ‘Low ideas density’ was present in 9 out of 10 nuns who had neuropathological evidence of AD, and only 2 of the 15 nuns without AD.

As all of the nuns had lived in a very similar environment from young adulthood, Snowdon and his colleagues suggested that the relationship between poor linguistic ability in early adulthood and impaired cognitive performance in later life was likely to be associated with cognitive ability in early life and not with environmental, health, or educational factors in adulthood. He postulated that the nuns with a high density of ideas as young adults had a higher ‘neurocognitive reserve capacity’ —a sort of extra supply of neurons that allow us to cope for longer if we begin to develop the brain degeneration that is the hallmark of AD. In order to support such a hypothesis, it would be expected that some nuns with a high ideas density in their twenties and who did not demonstrate severe cognitive impairments in old age would nevertheless demonstrate the pathological changes of AD on autopsy; that is although they had AD their cognitive reserve was great enough to compensate for and ‘disguise’ the disease. But only one of the 25 nuns who died and was autopsied showed this pattern, and thus Snowdon concluded that the ‘neurocognitive reserve’ hypothesis was unlikely. An alternative hypothesis is that low linguistic ability in early life is an early expression of later AD. This finds some support in the autopsies of individuals aged 20 to 100 years that show that some of the characteristic AD brain changes develop over five decades.

If other research supports this, what does this mean? It could mean that some of us have, perhaps from birth, less cognitive capacity (and perhaps less linguistic cognitive capacity) and thus we are going to show signs of dementia earlier than others. If this is genetic, perhaps we are stuck with it and can do nothing about it. Or perhaps it means that very early brain stimulation is important; stimulation that encourages every baby and child and adolescent and teenager to develop all the skills they can, and particularly linguistic skills. We know that by the time we reach our early twenties, when Snowden’s nuns wrote their brief autobiographies, our brains are pretty much at their peak and any ability to develop further neurocognitive reserve is limited. Of course this doesn’t negate keeping our minds and bodies active throughout life as a means of protecting ourselves from mental deterioration. If we don’t, we may lose neurons and skills faster than we would otherwise. So the take-home message is to give our children every educational, creative, and physical opportunity possible—and especially creative language opportunities—and continue to engage in a range of mental and physical activities ourselves until we are 6 feet under. Even if future research finds that this doesn’t after all help protect us against AD, at least we will have a much better chance of enjoying our lives while we can!

I loved that movie - very heart-wrenching, and beautifully done.
I like your comments about what is currently considered the best way to guard against Alzheimer's. Instinct says that this must be correct - that giving children the opportunities, and maintaining those mental and physical activities throughout life, will keep the brain stimulated. Going sideways into studies of animals in captivity, we see that the same holds for them.
It's great when science connects with instinct.