Tags: travel, Books I am reading 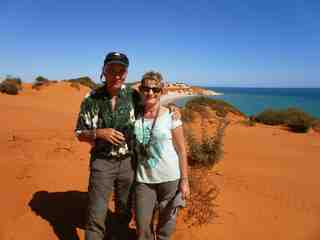 Grey Nomads, Peron Peninsula, Western Australia
For the past 11 weeks husband John and I have been traveling in Australia. In this country, baby boomers who migrate in their thousands – and in their campervans -- from the colder parts of Australia to the hotter central and northern areas are affectionately known as GREY NOMADS! We from New Zealand are honoured to share the title while we’re here. Our first 5 weeks was in Western Australia; first the beautiful and incredibly wealthy city of Perth, where it was no warmer than our winter on Great Barrier Island, and south to the wine and fruit growing areas around Margaret River – even colder, but lovely just the same. We then spent 10 days in a campervan traveling about 1000 kms north of Perth; as far as a wonderful marine park with the strange name of “Monkey Mia”. Here we sailed around on catamarans in the balmy breeze and spotted many playful dolphins and dugongs, the large, shy and rather ugly sea mammals, rumoured to have been mistaken for mermaids by ancient – drunk? – mariners. A highlight was a day-long 4WD tour onto the Peron Peninsula, the colours of which were unbelievable –red earth, blue sea and sky, white sand. Our guide, Tim Hargreaves, from the local town of Denham, was an absolute delight, and kept us amused and informed for eight hours. The other highlight was the wildflowers that carpeted the countryside for 1000 or so kilometres. We were lucky -- this is the best season for wildflowers for 40 or more years because of the recent rains (after decades of drought). This area of Western Australia is home to one of the highest biodiversities of flora in the world.

We then enjoyed a week staying near Federation Square in the heart of Melbourne, for their annual Writers’ and Readers’ Festival. Among many others we heard Jonathan Franzen a couple of times (and I am now nearing the end of his latest novel “Freedom”) and Jane Smiley. One of Jon Franzen’s sessions was on the topic of what bird watchers and writers have in common! (Many things…) He made the interesting comment that he had never known true pleasure until he became a birder 10 years ago. As is often the case, reading a novel with some knowledge of the personal life of the writer adds to the reading experience, even if the writer insists that there is not a smidgeon of autobiographical material in his work. “Freedom” is an ode to a small bird called a cerulean warbler (it even features on the cover), whose very existence is threatened in the US. Of course there are a few other themes in the book!! And to be fair, JF did not deny all autobiographical content. We discovered during his talk that the Melbourne sewage ponds outside the city were one of the best places for birds – Jon Franzen had been there the previous day – so as birders ourselves (well I am a hanger on of a true birder) we went there the following day and saw 40 or so species of birds, including some “lifers” for John (ie: birds one sees for the first time). I am never quite sure whether I am seeing a “lifer” or not! The moral of this story is that Writers’ Festivals are not as narrow as you might think.

Our last 7 weeks we are spending in our own little holiday place north of Cairns, way up in the northern tropics of Queensland. Here we laze about, go birding, go on hikes, swim, (ignoring the “Beware of the Salt Water Crocodiles and the Stingers” notices), read lots of good novels, and write and write. In fact I am sitting on our patio with the very pretty lagoon swimming pool 5 meters away as I write this. With luck, John will bring me some lunch soon. I had to do some actual work for a full-on week, checking my copyedited manuscript for “Trouble In Mind”, and for relief reading the generous advance endorsements that have been coming in for it (see the “Reviews” menu tag). Since then I have been revising –again--my own great work of fiction. Meanwhile John is writing his family’s history, which requires him to know everything there is to know about the workhouses of Yorkshire. Tomorrow is a rest day and we are sailing out to a tiny coral cay called Low Isles on a catamaran, to snorkel, and eat a splendid seafood lunch provided by the tourist company.

Meantime, back in still-quake-torn Christchurch, our daughter is about to have her third baby; in fact it is due in two days. We will view him or her as soon as we get back on 20th October.

So at this point in time, we can recommend the life of a Grey Nomad to all.

Hi,
Thanks for the information. I really liked reading it and I think it is very informative and has nice precise information regarding a very rare topic. Check out the official Australian Immigration website at http://www.imigrate.com.au This website gives you about the different visas & jobs that are available and to know if you qualify. And what you need to do to apply.

Thank you so much for sharing this information.I have a very useful link.In this link everything about Australia and Australian Immigration is present.Here is link: http://immigrationexperts.pk