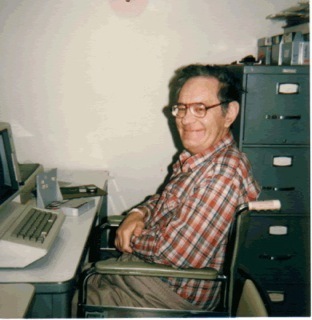 HM, aged 60, in the lab at MIT
Neuroscience today is high tech—fantastic imaging machines churn out brain scans of the living, thinking brain, and computers crunch data to highlight patterns that may or may not fit the latest theory about how the mind works. How far we have come from the studies of the great neurologists and psychiatrists of the 19th century who relied on clinical descriptions of individual patients to further our knowledge of the brain and its mind. Or have we?

Often, the latest neuroscience article summarizing a mass of brain imaging data seems to tell us something we have known for a hundred years or more. Paul Broca, in his 1861 article describing his patient Tan, concluded that Tan’s loss of fluent speech was related to the lesion found at post mortem in the third frontal gyrus of the left frontal lobe of his brain. High-tech experiments continue to support Broca’s discovery, albeit with greater precision—neuron by neuron—and the finding that there are variations across individuals in the extent of the brain area involved in fluent speech. But the central fact—that this area of the brain is specialized for expressive language— remains unchanged.

There is no argument about the limitations of single cases from the past; they couldn’t tell us which neurons were firing, and which neurotransmitter was missing. So in these important ways neuroscience has made giant strides, leading to new treatments and prevention of neurological disease. But even in today’s world the clinical case study deserves considerable credit for laying the foundations for more “sophisticated” studies.

Case studies, often almost novelistic in tone, also play a role in engaging the non-neuroscientist in what could otherwise be a daunting topic. The experiences of patients with damaged brains and disordered minds are intrinsically interesting to many people, perhaps because we can all relate in some small way to forgetting important information, not being able to say a word although we know we know it, or becoming clumsy and inefficient when we are overtired or intoxicated. Neurological disorders of one sort or another are common, and few people reach midlife without being touched by a family member or close friend with a head injury, dementia, stroke, or other neurological problem.

The Russian neurologist, Alexandr Luria (1902-1977), is considered by many to be the “father” of neuropsychology, and one of his greatest contributions was his belief that the brain and mind were influenced not only by biological factors but also by social factors. Modern neuroscience—having for many years dismissed such an idea—now embraces it. Luria was a prolific researcher and published numerous comprehensive studies on language, perception, and memory, but it is his case studies that have stood the test of time. Whereas theories change as new data are gathered, carefully described clinical cases remain forever current. Luria’s intimate biographical studies, The Mind of a Mnemonist, and The Man with a Shattered World, documented his patients’ lives and thoughts, not just over a few weeks, but over decades, an achievement that has perhaps been equaled recently by the most famous neuropsychological case of current times.

Henry Molaison lost his memory on an operating table in a Connecticut hospital in August 1953. He was 27 years old and had suffered from epileptic seizures for many years. His neurosurgeon, William Beecher Scoville, stood above an awake Henry and suctioned out the hippocampus—the seahorse-shaped structure lying within the temporal lobe—on both sides of the brain. Henry would have been drowsy and probably didn't notice his memory vanishing as the operation proceeded. The operation was successful in that it significantly reduced Henry's seizures, but it left him with a dense memory loss. Up until then it had not been known that the hippocampus was essential for making memories, and that if we lose both of them, we will suffer a global amnesia.

Montreal Neurological Institute neurosurgeon, Wilder Penfield, and neuropsychologist, Dr. Brenda Milner, quickly realized that Henry's dense amnesia, his intact intelligence, and the precise neurosurgical lesions, made him the perfect experimental subject. For 55 years, Henry—willingly, at least in the moment before each study—participated in numerous experiments, primarily in Dr. Suzanne Corkin’s laboratory at Massachusetts Institute of Technology. Many patients with memory impairments have since been assessed, including a small number with amnesias almost as dense as Henry's, but it is to him we owe the greatest debt. He has featured in almost 12,000 journal articles, making him the most studied case in medical or psychological history. Henry died on December 2nd, 2008, at the age of 82. Until then, he was known to the world—including thousands of psychology students— only as HM.

In another world-first, the Brain Observatory at UCSD dissected Henry’s tragically unique brain into 2401 paper-thin tissue sections during a 53-hour procedure (the whole process streamed live, online) and digitized it as a three-dimensional brain map that could be searched by zooming in from the whole brain to individual neurons. A perfect example of the classical single case study fusing with the very latest technology to provide—while the internet-savvy world watched—a unique data base for neuroscientists to use into the future.

Henry gave neuroscience the ultimate gift—his memory. Since the classic studies of neurological patients were published by Broca and Luria, thousands of people who have suffered brain damage, whether through accident, disease or a genetic quirk, have given priceless treasures to science by agreeing to participate in psychological, neuropsychological, and medical studies, often at a time when they are struggling with a serious illness. Many go a step further and donate their brains to science after their deaths. Our knowledge of brain disease and how the normal mind works would be greatly diminished if it were not for the generosity of these people. So next time you marvel at the latest high-tech brain imaging study, or benefit from a new treatment or procedure for a neurological condition, spare a thought for the patients, past and present, who made it possible.

This post was first published on October 13th, 2012 on the
Oxford University Press Blog site​a> .