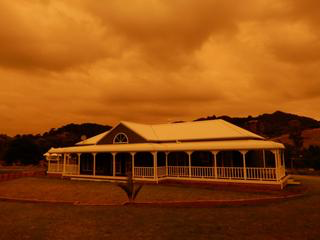 Killara bathed in the eerie glow of the Australian fires, 2,300 kms away..

Kia ora from Aotea New Zealand! My new random e-newsletter…random in the sense that it seems no longer to be monthly but perhaps six-weekly, or two monthly or …

For me a lot has happened since my last newsletter, and for the world even more has happened. For me day-to-day life has been good, for the world, terrible. 'Natural' disasters, mainly (If climate change consequences can be called 'natural'). Especially the fires in Australia. Australia is our second home; we have a small place in Far North Queensland where we go to for a few months every year (in the NZ winter; June to late September), and have many close friends there, some of whom have been in the firing zone. When much younger and with four small children, we lived in Canberra where lately the air quality from the fires has been so bad that one friend says she can't see across the road. In January because of the wind direction, much of New Zealand, 2,300 kms away from the fires, including our remote island off the NZ coast furthermost away from Australia, turned an eerie orange; the sun disappearing behind the haze, semi-darkness descending around three in the afternoon. (The photo above is of our Queenslander on Great Barrier Island in the haze of the fires from across the Tasman. This is the actual colour; no editing of photo at all.)

These fires are behaving in ways never seen before, and are dwarfing all other terrible fire events in other parts of the world in intensity and magnitude. Rural fire teams from our little island have been dispatched to Australia along with fire teams from all over NZ to help the exhausted Australian firefighters. And of course other countries have also pitched in to help. The horror is that this is not going to be a once in a hundred year fire event, but likely an annual fire event.  Do read this excellent and heart-rending article that really gives the feel of the terror of being in the middle of it.

Meantime, here in NZ much of the country is in drought and on our island many have already used up all their tank water supply. Our two new tanks for our new home here (500,000 litres for two people who know how to conserve water) which we were assured would easily see us through the driest of summers, are low. In this part of the country and many others this is the longest period without at least one millimeter of rain since records began.

Crazily, family in Wales in the UK yesterday e-mailed to say they were in the midst of another massive storm that is causing further damaging flooding.

At least our news these days has something other than the woes of the US impeachment efforts and the never-ending hype over their next election. And in the UK Brexit is finally decided, thank goodness, but not sorted.

It seems rather trite to be enjoying living far from it all, basking in the day-after-day sunshine and warm clear seas on a deserted white-sand beach, most of our visitors to the island having gone back to work and school. But trite or not, we are enjoying life. We have had many house warming parties, dinner parties,  and numerous visitors, and the new house is performing magnificently. The fabulous bull-nosed verandah, strung with vibrant pink begonias in hanging baskets (they use only a small amount of daily water!) does what it is meant to do and keeps the house cool and gives us a gracious space to loll about on, sipping G & Ts and contemplating the dried-up grassy expanses beyond.

'The Moon is Missing' set in London, New Orleans and on Great Barrier Island should be published later this year with an Amazon imprint; 'Call My Name Out Loud' set in Far North Queensland is at the beginning of my agent submittimg it to publishers; and I have sent her two extensive draft synopses/proposals for a possible next novel… one set mainly in Kenya, featuring rhinos and poaching, and the other set in Queensland and featuring seahorses and ballet!  (As an aside, one of my granddaughters has just started full time at the Queensland Ballet Academy; very exciting.)

The Wife and the Widow by Christian White.

Finished this suspense/murder this morning and had no clue who did it until the end! Thought I did; thought I had sussed the whole plot early on.  Of course there is nothing specific I can write about the novel without giving the game away so I'll simply say that it is an entertaining read; well written, fast paced, every chapter ends with cliff hanger, reminiscent of an Australian version of one of those addictive Nordic Noir thrillers one gets glued to and binges on on Netflix. Not as good (what is?) but definitely worth a read. Like 'Gone Girl' (the novel that I think started this species of the genre), 'The Wife and The Widow' has an unbelievable plot and too-horrible-to-be-true characters really, but who cares; it is meant to be entertainment. Makes one's own problems seem blissfully benign. Just what you want to read to keep your mind off countries burning down.