NEXT ACT FOR WOMEN INTERVIEW

Love to to read and share this interview in Next Act for Women;
Publishing Her First Novel While Living Off-Grid: Jenni’s Story. (Link: http://nextactforwomen.com/writing/novel-living-off-grid/)
Next Act For Women is an award-winning site included in "The Must-Read Blogs of 2015 For Those Over 50 on Huffington Post." It is the creation of an incredible woman, Hélène Tragos Stelian. She posts in-depth interviews with 50+ women who have followed their passions and changed direction. Her hope is to create a community where women can read about and join women who have made this leap, learning from each other as they strive to live out their Next Act. That’s me! Woo Hoo!  Read More
Be the first to comment 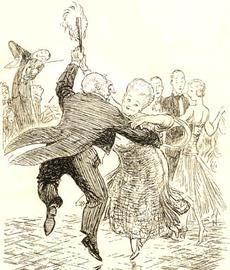 I wonder how many of the dancers knew they were engaging in the one physical activity that seems to beat all others in staving off cognitive decline and delaying the onset of dementia? A research article published in 2003 suggested just that (The New England Journal of Medicine, 2003, Volume 348, pp 2508-2516).
The long-term Bronx Aging Study, which began in 1980, looked at the leisure activities of 469 community dwellers aged 75 to 85 years with no signs of dementia when they were enrolled, to see if either physical or cognitive leisure activities delayed cognitive decline and dementia. A number of cognitive activities, including reading, playing board games, doing crossword puzzles at least four times a week, and playing musical instruments were associated with a lower risk of developing dementia over the next five or so years, but the only physical activity that decreased the risk of dementia was frequent dancing. Frequent dancing reduced the likelihood of developing dementia by a mind-boggling 76%, which was higher than any other cognitive or physical activity studied. Physical activities that did not appear to delay dementia onset included walking, bicycling and swimming. This was an observational rather than a carefully controlled study, with many inter-related factors to take account of, so one can’t take this as the last word on the matter. And there were physical activities, such as golf and tennis, that were not included because fewer than 10% of the senior citizens participated in them. Read More
Be the first to comment 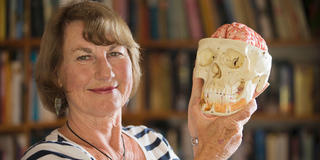 Photo: Greg Bowker
Enjoyed a lovely day with NZ Herald senior journalist, Andrew Stone and senior photographer, Greg Bowker, when they flew over to our island to interview me about "Trouble In Mind" and our off-grid lifestyle for the Weekend Herald on 13th Oct. Greg was very taken with the skull, complete with brain, that (who?) looks down at me from the top shelf in our library. Poor Yorick, alas, was somewhat dusty, but at least he wasn't 12 feet under. Click here for Link to the story​a>  Read More
1 Comments 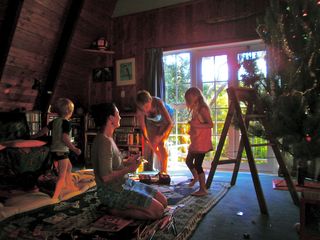 Decorating the tree
Christmas and New Year in New Zealand fall conveniently in the middle of summer. Schools and universities break up for the year, and every business and institution that can close, does. The week (or month…) before Christmas is the usual mad rush of present buying, parties, stacking the pantry and fridge with goodies, and putting up tents in the garden for the overflow of visitors. Read More
Be the first to comment 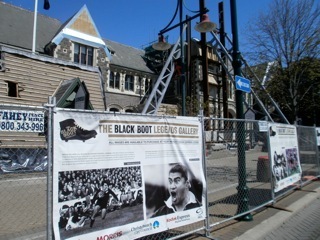 Earthquake damaged Christchurch Arts Center and All Blacks poster
We are back in New Zealand and it is early summer. Our beautiful island is at its best with gardens overflowing with scents and the sounds of bees and the sea and sky deep blue against the white sand. Even better, there are very few people around and our beach is usually deserted. We have put up the fence along the edge of the dunes to protect the nesting birds; rare NZ dotterels and endangered if not rare oyster catchers. Read More
Be the first to comment

Tags: Off-Grid Living, NZ News
Early in May I sent my Trouble In Mind manuscript to my editor, receiving it back with glowing praise and no edits other than a small number of words where I forgot to change my NZ-British spelling to the American spelling. I have been overcome with the generosity of many well-known writers, neuroscientists and novelists) who have agreed to read a pre-publication copy and endorse the book if they like it.  Read More
Be the first to comment

Tags: Off-Grid Living, NZ News
It is nearing the end of March and the variable weather of early Autumn is with us; but this far north the sea is still warm enough to swim in and the days still warm enough to want to. The past few weeks have been horrific for first Christchurch, and then Japan. The triple disaster of earthquake, tsunami and potential nuclear disaster in Japan dwarf the Christchurch earthquake by several thousand times,  Read More
Be the first to comment

Year of the Rabbit 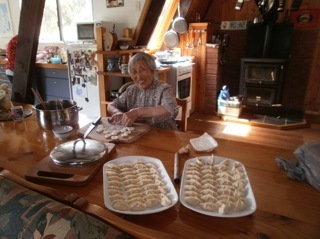 Dumpling production for Year of the Rabbit Chinese New Year feast!
On a more cheerful note, here on the island, where all is well and we got only a slightly higher tide following the Japan tsunami, there has been a lot of feasting. This invariably happens in the summer months as friends arrive to enjoy the peace and beauty of our bush and beaches, catch fish, and enjoy the simple pleasures of sharing fabulous food and wine, usually seated around a big table on the deck of a beach house overlooking the sea or bush. A few weeks ago – just before the Christchurch earthquake – a Chinese friend visited us with her mother and prepared an amazing and delicious nine course meal for the Chinese New Year – the Year of the Rabbit – for 12 of our friends.  Read More
Be the first to comment

Tags: Off-Grid Living, NZ News
Everyone will have seen the horrifying images of the destruction caused by the earthquake that hit our second biggest city, Christchurch, at lunchtime on Tuesday, February 22nd. NZ is a small country of just 4 million people, and there will be no-one in the country untouched by this. Today, 3 days later, 600 specialist search and rescue  Read More
Be the first to comment 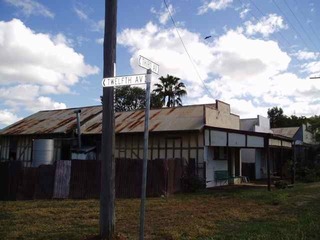 12th Ave: "Water Coming Soon, 2011!"
The silly season is over and our children and grandchildren have gone leaving in their wake two electric toothbrushes (left by two separate families…), one piece of jigsaw puzzle, a CD of Christmas songs for toddlers, and a lot of fish bait in our freezer. This I have re-wrapped in three plastic bags as the smell of fish bait, however solidly frozen, somehow permeates everything near it. I would love to throw it out but it will apparently be used to catch some big fish in due course. Our vegetable garden is 10 feet high and finding anything specific in it is a journey of discovery; it is in sore need of a few long hours of weeding. But the sea out there is blue and warm and the sand golden and hot, and a lazy day on the sheltered sandy beach across the rocks, lying in the shade of a huge pohutukawa tree reading, dozing, and occasionally venturing into the water to float and dream, or even catching a wave or two at the main surf beach is irresistible.  Read More
Be the first to comment